← more from
Mushroom Hour Half Hour
Get fresh music recommendations delivered to your inbox every Friday.
We've updated our Terms of Use. You can review the changes here. 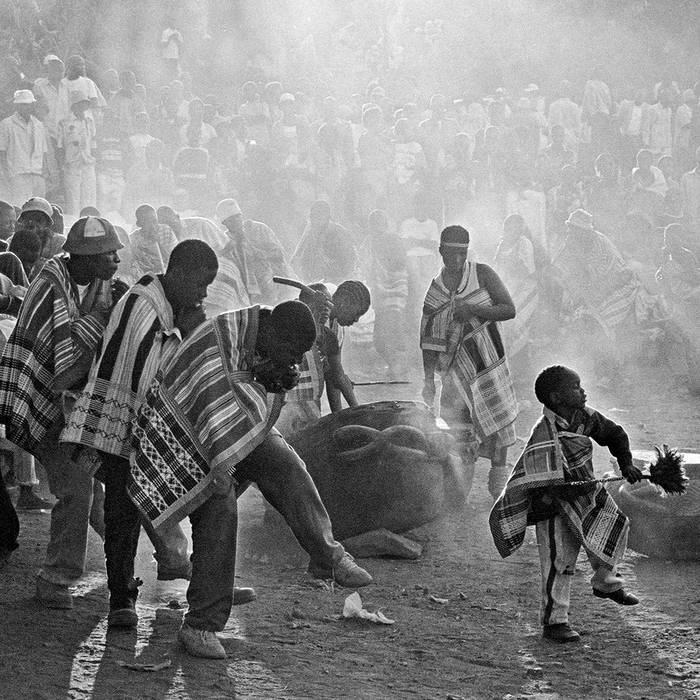 
Group Theory: Black Music is a stunning new statement from South African drummer and composer Tumi Mogorosi. Standing in the lineage of South African greats such as Louis Moholo-Moholo, Makaya Ntshoko and Ayanda Sikade, Mogorosi is one of the foremost drummers working anywhere in the world, with a flexible, powerful style that brings a distinctive South African inflection to the polyrhythmic tradition of Elvin Jones, Max Roach and Art Blakey. Since his international debut on Jazzman Records in 2014 with Project ELO, Mogorosi has been in the vanguard of the South African creative music scene’s burgeoning outernational dimension, taking the drummer’s chair in both Shabaka Hutchings’ Shabaka and The Ancestors formation and with avant-garde noiseniks The Wretched.

As Mogorosi’s first project as leader since 2014, Group Theory: Black Music marks a return to the drummer’s musical roots. The sound is anchored in the transnational tradition of Great Black Music, with the core of the group comprising a quintet of newcomers Tumi Pheko (trumpet) and Dalisu Ndlazi (bass) alongside the experienced guitarist Reza Khota, with Mogorosi himself and altoist Mthunzi Mvubu, another Ancestors member, representing the current generation of South Africa’s creative music torchbearers. Motivated by Mogorosi’s driving dynamism, the group create deep-hued modal grooves that burn with a contemporary urgency, while established pianist Andile Yenana brings an elder voice to three of the tracks. Featured vocalists Gabi Motuba (Project ELO, The Wretched) and Siyabonga Mthembu (The Brother Moves On) take differing approaches to the spiritual standard ‘Sometimes I Feel Like a Motherless Child’, while poet Lesego Rampolokeng pours out lyrical fire on ‘Where Are The Keys?’, creating a bridge back to the Black Consciousness movement and figures such as Lefifi Tladi and Wally Mongane Serote.

But where Group Theory: Black Music moves an established format dramatically forward is in the addition of a ten-person choir. Conducted by Themba Maseko, their massed voices soar powerfully above every track as a collective instrument of human breath and body, and enter the album into the small but significant number of radical recordings to have used the voice in this way, such as Max Roach’s "It’s Time", Andrew Hill’s "Lift Every Voice", Billy Harper’s "Capra Black", and Donald Byrd’s "I’m Trying To Get Home". At the same time, the presence of this wall of voices brings an inextricable connection to the venerable tradition of South African choral music, and to the importance that the Black choir has had for South Africa’s religious, political and social cultures, including the culture of South African creative music itself. From the Manhattan Brothers and the choral compositions of Todd Matshikiza to figures such as Johnny Dyani and Victor Ndlazilwane, the collective power of voice has been one of the cornerstones of improvised creative music in the country.

‘I started out in a choir’, says Tumi, as he reflects on the significance of Black voices in concert. ‘There’s this idea of mass, of a group of people gathering, which has a political implication. And the operatic voice has both a presence, and a capacity to scream, a capacity for affect. The instrumental group can sustain the intensity of that affect, and the chorus can go beyond improvisation, toward communal melodies that everyone can be a part of.’

This potential for communality in the music swings close to Group Theory’s conceptual centres of gravity. The title refers to the mathematical theory of the same name, the essentials of which concern the axioms that make a simple set of items into a true mathematical group – associativity, closure and an identity element. These mathematical ideas offered Mogorosi a metaphorical platform for thinking about the way that individual players in a musical unit are also bound together at the moment of creation, in a unity that begins to challenge the individual and complicates conventional ideas of leadership and hierarchy. In bringing experienced musicians such as Yenana and Khota into the orbit of younger players, Mogorosi also wants to re-orientate the idea of teacher-student relations toward a more open vision of intergenerational knowledge sharing. ‘We are looking for questions, not answers’, he says.

Mogorosi’s overarching vision on Group Theory: Black Music is encapsulated by the touchstone quotation from Amiri Baraka – ‘New Black Music is this: Find the self, then kill it.’ For Mogorosi, these words speak to an essential feature and function of Black creative and improvised art – the search for the point where individual boundaries collapse into the universal ongoing flow of the music, at the moment of group creation. This flow is not local, it is transglobal, and it joins the music of the diaspora with Africa, allowing connections and relations to range across historic and contemporary spaces of struggle, self-determination and transformation. Such effects are also transtemporal, dropping deep down into the wells of history to bring forth sounds from the present and future, and allowing the music to burrow back into the past. As Baraka’s words imply, the individual cannot escape this search unchanged, and the creative musician does not desire to: in the time of its creation, New Black Music intends to flow into and through the performers from sources beyond them. The writer of a song is never the only author; the soloist always speaks for others; the leaders are never one but a host of many. Previous times and places, previous performances and compositions, previous souls and struggles are always made manifest in the music; the search for the inner self is also a quest to dissolve the individual into the living soundways of those who came before and those who will come after. ‘The album is under my name,’ says Tumi, ‘but the ideas aim at a decentring of the individual composer or author, and a a decentring of the idea of the “leader” – it tries to encapsulate the idea of a group effect, to go beyond the point of origin, and it refuses geo-specific narratives.’

South African creative and improvised music, with its nomadic history of journeys between the US, Europe and South African, has always been exemplary of these ongoing processes, and it is fitting that Group Theory: Black Music should itself be the result of an international collaboration. Starting from a shared vision and understanding of the parallels between the music being made in their respective countries, South African label Mushroom Hour Half Hour and London based label New Soil were able to pool their resources to support Tumi’s large-scale creative vision for this project and enable it to find the global audience it seeks and deserves.

Since his international debut on Jazzman Records in 2014 with Project ELO, Mogorosi has been in the vanguard of the South African creative music scene’s burgeoning outernational dimension, taking the drummer’s chair in both Shabaka Hutchings’ Shabaka and The Ancestors formation and with avant-garde noiseniks The Wretched. ... more

Bandcamp Daily  your guide to the world of Bandcamp

Frayle's Gwyn Strang and Sean Bilovecky join the show to talk about their cathartic new album.